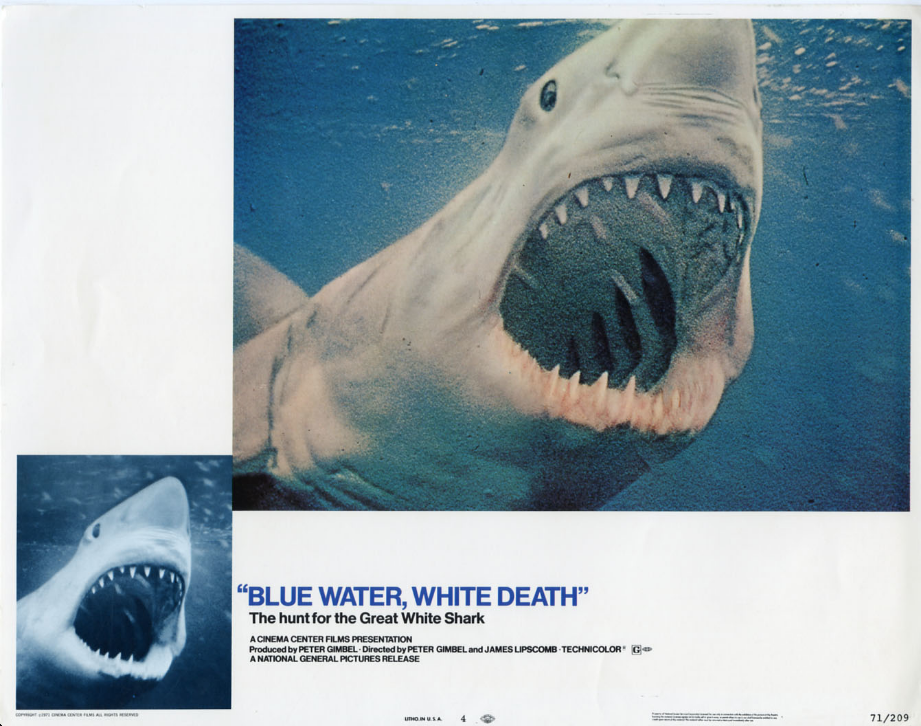 An article in my August issue of National Geographic opens as such:

“When the documentary Blue Water, White Death hit US theaters in 1971, its footage of great white sharks crashing into diving cages became instantly iconic. But the footage that stands out 45 years later is a long scene showing oceanic whitetip sharks swarming a whale carcass a hundred miles off the coast of South Africa.

“It is an amazing  scene for two reasons: first, because the divers leave the safety of their cages to film the sharks, believed to be the first time anyone had ever tried the technique among feeding sharks [reaction: HOLD UP. WHAT NOW!?]. And second, because it’s a scene that might never be replicated—a marine version of the last photograph of endless bison herds roaming the North American plains [WELL NOW I GOTTA WATCH THIS].”

So obviously I dug it up. Thank you, internets. Not only is this documentary a gold mine in ’70s fashion, hairstyles, and lingo, but it’s also pretty cool to watch four absolutely insane people with underwater cameras swim freely with literally hundreds of feeding sharks. And that’s not the only time they left the cage. Oh, no. First they listened to a diver tell his story about getting attacked by a great white, checked out the guy’s scars, hung dead fish from their boat to attract a 16-footer, and then, when the shark was gnawing on dinner right beside their cage, they decided to OPEN THE DOORS to get closer. Because they’re crazy, obviously.

Now, I don’t recommend this documentary if you watch Shark Week every year, because it’s pretty low-budget (I have to assume they spent all of their money on charting a boat that chased around sharks for five months, cans of blood, and oxygen tanks), and the film quality is that special ’70s-era bad. But for me Blue Water, White Death: The Most Frightening and Fascinating Sea Adventure Ever was totally worth it.

Don’t be afraid. I won’t smite you. Probably. Cancel reply